I do not believe what MAC users tell me. They are not easier to use at all! Up date this, log into that, back-up something else ... and on and on.

For about a month, 2 of LA's MAC/Apple products have been dying. Her iMac (computer) and her iPhone (cellphone).The computer worked it's way from the "pin wheele of death" to the "blue screen of death" in about 2 weeks. We tried a number of different things to help it out, but it died! The HDD needed to be replaced. The iPhone battery has been discharging early and not holding a charge for more than 2 hours.

Not a prob with a PC.  Open the case .. pop out the old HDD .. pop in the new one ..reinstall the OS .. and Bob's your Uncle! No, MACs are a little different, and needed going into the shop. The folks at the apple store wanted $350 for a 250Gig HDD. I could buy a new Laptop for that! We found a place to do it for less than $200, and that with a terabyte drive. I installed the OS, which too over 2 hours.

Rogers was very understanding about the phone, and agreed to allow for an early upgrade for both of us to iPhone 4. The problem there .. they were our of stock and had no idea when they would be getting more. Apple would not tell them when to expect a shipment.

I was admonished by my favorite oldest niece yesterday for not posting anything new in a while. Between being sick, a show and an open house, it's been kinda busy. 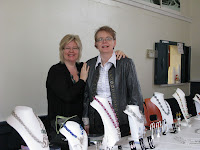 We did a new craft show the beginning of the month. It was sponsored by the West Toronto Beading Guild, and was the first year for the show. And.. as with most first shows.. it wasn't that good. We covered the cost of the table, which is always good. LA used the other money that we earned to buy gifts. I didn't come home with any more money in my pocket than when I left. I would do it again because it is growing. LA is not so sure.

We had an open house last weekend to see if we could generate a few sales that did not happen at the craft show. A few folks stopped over and we sold a few things. That is our last event for 2010!

Just when it seemed it was a time to rest the phone started ringing for other things. We now have two bead stores wanting to put "Heavy Metal" components for their store. Good on us! In 2011 you will find these items at Beads of Colour in Dundas, and Rainbow Minerals in Ottawa.

So, it does not look like we will be taking a break over the holidays. Time to tie up some loose ends, and make sure all is in place for 2011.
Posted by Unknown at 08:23 No comments: 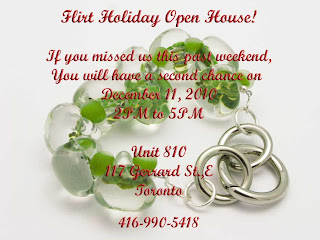 We are haveing a small Open House on Saturday. Please stop by for Tea and chat!
Posted by Unknown at 13:49 No comments:

Yesterday I had the chance to travel to Upstate New York. I got to travel through Buffalo where I 90 was closed for 2 hours last week because of an accident and snow fall. Yep, they got snow! Something I've not seen yet in Toronto. I packed extra food, water and blankets in case the same thing happened this time. I was safe though. The roads were fine.

There was some  snow around St. Catherine's and then again between Rochester and Syracuse, but not much. Not like growing up in the Ottawa Vally where we would get over 10 feet a year, and snow drifts 4+ feet high. I am grateful that I learned to drive in those winter conditions. It makes days like yesterday a breeze.

Today I will be traveling back through those areas. I've not looked at the weather yet, but the problem areas were calling for up to 6 inches yesterday and over night. Lets see what happens today.
Posted by Unknown at 09:53 No comments: